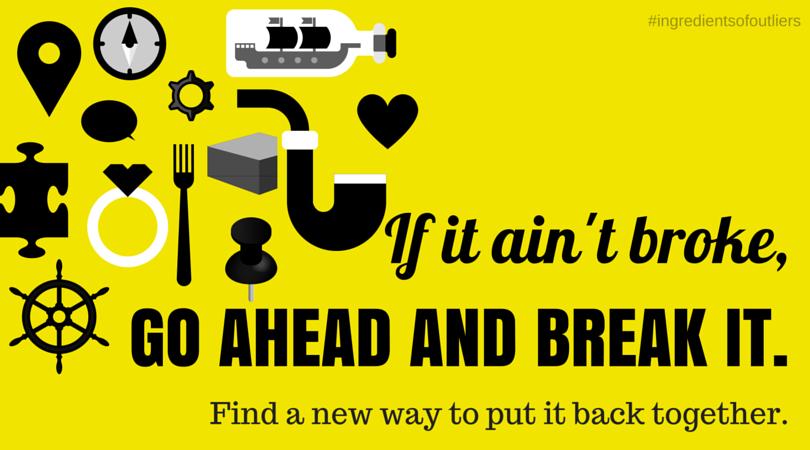 From Chapter 16 “The Rare Find” in Ingredients of Outliers.

Unless you’re in at least your late 40s, the name Bert Lance may mean nothing to you. He first came to prominence in early 1977, when newly elected President Jimmy Carter appointed him Director of the Office of Management and the Budget (OMB). A banker and fellow Georgian, Lance perhaps received the appointment as a reward for his service to Carter during the 1976 presidential campaign.

Lance’s tenure at the OMB ended within a few months. He resigned as a result of certain charges leveled at him for actions which took place prior to his appointment, charges for which he would later be acquitted and which have no bearing on this story.

What Lance is probably best remembered for was a comment he made during an interview with Nation’s Business, a publication of the U.S. Chamber of Commerce. Lance told his interviewer he had a solution to the federal government’s spending excesses. “If it ain’t broke, don’t fix it,” he said, adding, “That’s the trouble with government: fixing things that aren’t broken and not fixing things that are broken.”

He wasn’t the first to use the “ain’t broke” statement, a bit of long-held Southern-style wisdom. But it did give Bert Lance his moment in the spotlight, and the term, unfortunately, quickly became the mantra of the status quo crowd, along with such bromides as “Don’t make waves,” and the others listed above.

Lance’s “ain’t broke” statement isn’t only bad grammar—it’s bad advice. It’s the battle cry of the bureaucrat, the slogan of the status-quo slaves, and the mantra of the risk averse. There’s always going to be a better way, a smarter way, an easier way, a faster way, a different way, a more useful way, a more creative way, and a more profitable way.

If it ain’t broke, go ahead and break it and come up with a better way to put it back together. Don’t just accept things as they are. Ask questions: Why is it that way? How can we improve it? What other applications can we find for it?

Follow the advice of contemporary artist Jasper Johns: “Take an object. Do something to it. Do something else to it.” Figure out how you can fix it, change it, and improve it. You might be surprised at how creative you can be.

Consider this advice from one of America’s greatest inventors, Alexander Graham Bell: “Don’t keep forever on the public road. Leave the beaten path occasionally and dive into the woods. You will be certain to find something that you have never seen before. One discovery will lead to another and before you know it you will have something worth thinking about to occupy your mind. All really big discoveries are the results of thoughts.”

Among my favorite poets is Sam Walter Foss, born in New Hampshire in the mid-nineteenth century. His best-known poem is probably The House by the Side of the Road, but one of my favorites is titled The Calf-Path. It’s a bit too long for this space but it tells a great story. Here are the opening lines:

One day through the primeval wood

A calf walked home as good calves should;

But made a trail all bent askew,

A crooked trail as all calves do.

Since then three hundred years have fled,

And I infer the calf is dead.

But still he left behind his trail,

And thereby hangs my moral tale.

As the years passed, other animals began following that same path: First came the dogs, then a sheep, then flocks of sheep, and finally horses and men. In time, the well-worn crooked path became a lane, and then a village road, a city street, and a thoroughfare across a continent. Foss continues:

A hundred thousand men were led

By one calf near three centuries dead. . . .

For thus such reverence is lent

Were I ordained and called to preach;

For men are prone to go it blind

Along the calf-paths of the mind,

And work away from sun to sun

To do what other men have done.

And out and in, and forth and back,

And still their devious course pursue,

Another Foss poem I like is The Man from the Crowd, which paints a different picture. Here are the last of its four stanzas:

And where is the man who comes up from the throng

Who does the new deed and who sings the new song,

And makes the old world as a world that is new?

And our praise is exultant and proud.

We are waiting for you there – for you are the man!

Come up from the jostle as soon as you can;

Come up from the crowd there, for you are the man –

The man who comes up from the crowd.

How do Foss’s words resonate with you? Are you among those who “work away from sun to sun, to do what other men have done?” Or are you the man, or the woman, “to do the new deed and sing the new song?”

Here’s what they mean to me. Don’t be a follower. Learn from others, emulate the traits you find worthy, stay away from the ones that won’t work for you. Whether you succeed or fail, it will be yours to revel in or learn from. There’s no one better than you to determine what works best. So stand on the shoulders of giants, look beyond their horizon, chart your own course, and go for it.

Previous: 5 Crucial Mental Health Concerns for National Women’s Health Week
Next: 7 Creative and Social Ways to Get Fit without the Gym