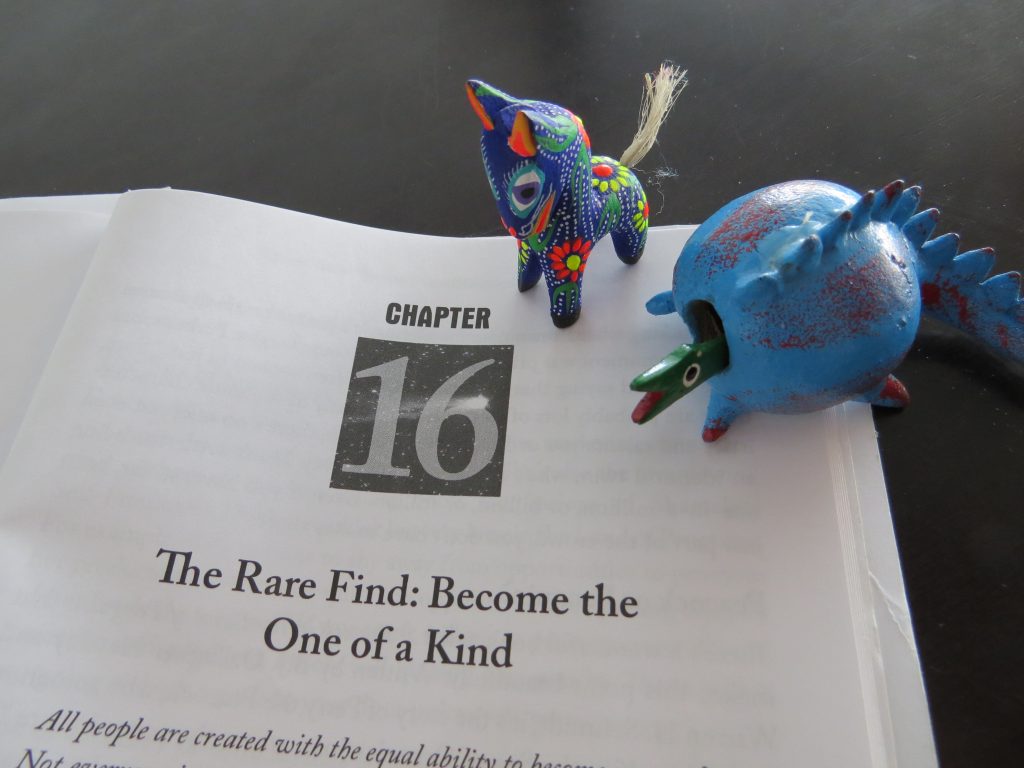 From Chapter 16 “The Rare Find” in Ingredients of Outliers.

Are you that one-in-a-million person who stands out from the crowd? Before you answer that question, consider these words by Emmy Award-winning writer and comedian A. Whitney Brown: “There are a billion people in China. It’s not easy to be an individual in a crowd of more than a billion people. Th ink of it. More than a BILLION people. That means even if you’re a one-in-a-million type of guy, there are still a thousand guys exactly like you.”

Is Brown on to something here? Could there be a thousand, or even a few hundred, guys—or gals—exactly like you? Well, using China as an example is a bit of an exaggeration. In the first place, the population of the U.S. is about three hundred million. Assuming one-third of those are children and that the rest are split evenly between men and women, there are theoretically “only” about a hundred folks exactly like you.

Considering what Brown does for a living, it’s probably safe to assume that his comment was primarily to generate some laughs. Perhaps, but there’s an old saying that “Many a truth is often spoken in jest.” Sure, there are probably lots of folks who have many of the same characteristics and talents you or I have. Nevertheless, there’s no one, not even an identical twin, who’s like you in every way. Don’t settle for being one-in-a-million, or billion, or trillion. Even if you have, so far, been just part of the crowd, you don’t have to stay there.

There’s a wonderful book titled A Peacock in the Land of Penguins that makes this point beautifully. Written by B.J. Gallagher Hateley and Warren H. Schmidt, it’s the story of Perry the Peacock, who somehow finds himself in the Sea of Organizations, where the penguins are “In Charge!” Other kinds of birds may enter but are expected to change and to “fit in.”

Perry felt welcomed at first but soon the grumbling began. “You’re too flashy for us,” he was told and was urged to put on a penguin suit and to learn to waddle, as all good penguins do. When he asked why, he was told, “This is the way we do things here. You need to conform.” It didn’t take Perry long to realize he was out of place in that think-alike, dress-alike, sound-alike, live-alike world.

One day, Sara the Seagull told Perry that on one of her flights she’d spotted a place called the Land of Opportunity, where different perspectives were not only permitted but were encouraged. That was all Perry needed to hear and he quickly left the Sea of Organizations behind. He was warmly welcomed in the Land of Opportunity and quickly learned that it was much more than a place—it was a state of mind, where new ideas were eagerly accepted. Perry, resplendent in his bright feathers, knew he had found a home.

This isn’t meant to say that conformity is always bad. Sometimes we have to “go along to get along.” Hopefully those times are rare and knowing when to stand out and when to fade in is an integral skill set to learn.

The Sea of Sameness

Debbie Allen is a very successful entrepreneur, marketing consultant and much-in-demand professional speaker. She’s also the award-winning author of the best-selling book, Confessions of Shameless Self-Promoters. Debbie wouldn’t last very long in the Land of Penguins. For example, she’s not one to shy away from opportunities to promote her products and services—quite the opposite. In the opening chapter of her book she writes: ““If you aren’t willing to promote your talents, expertise and products, others will quickly pass you by. The world is not going to beat a path to your door unless you pave the way.”

One of Debbie’s favorite sayings is: “If you don’t toot your own horn, you can’t enjoy the music.” At the same time, she fully recognizes the need to back promotion with performance. Otherwise, you’ll be quickly dismissed as a blowhard. That’s true for entrepreneurs, professionals, business leaders, and all those who aspire to succeed in whatever field they choose.

Keep on the lookout for the warning signs of “forced conformity.” They go something like this:

Of course, those aren’t reasons, but excuses—excuses to keep from sticking your neck out, to dare to be different, to challenge the status quo. How much better to follow Debbie Allen’s advice, “To be successful, you can’t keep swimming in the sea of sameness.”

Previous: Game Changer Christine Jones Announces Run for Congress in AZ
Next: 5 Out of this World Books for Your Future Astronaut