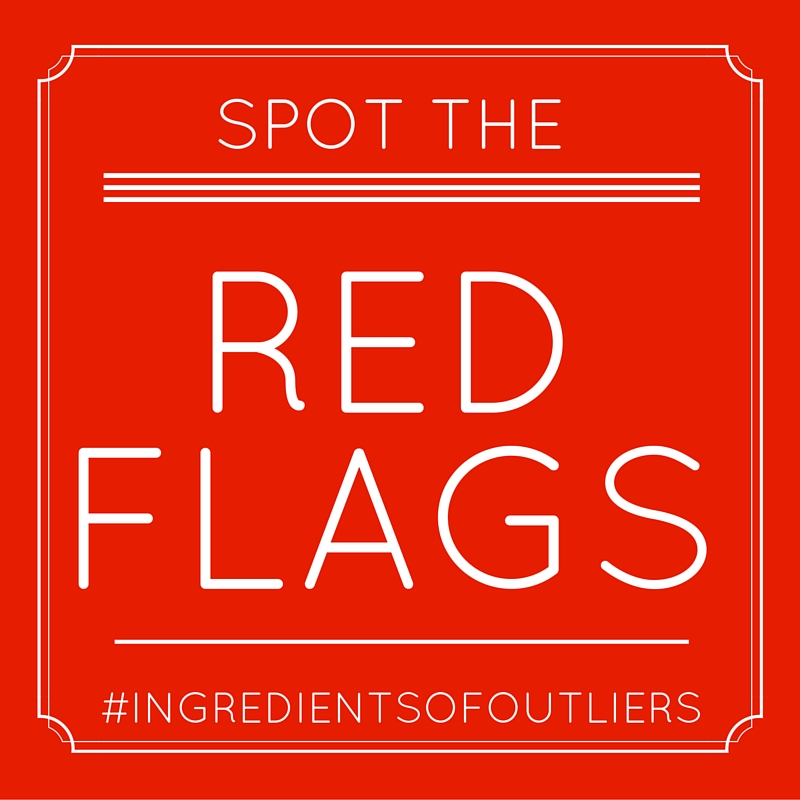 From Chapter 15 “Intuition” in Ingredients of Outliers.

If your work responsibilities involve interviewing and hiring new employees, then recognizing the wide array of red flags you’re likely to encounter will make your job a whole lot easier. For example, let me tell you about a recent experience I had with a candidate for a leadership position in my organization.

This woman came with high marks from colleagues and friends. I was really looking forward to meeting her, as we needed what I was told was in her “wheelhouse” (a/k/a skill set).

Prior to any interview, I try to read from the bottom up and between the lines of the résumé, looking for gaps in work history, lateral or backward moves, verbiage which sounds extreme or over the top. For example, one candidate wrote: “Using Six Sigma techniques and tools, I took the company from losing $1 million a year to making more than $4 million per year.” Really? This was on the résumé of someone applying for a middle manager role who had completed the complex and detailed Six Sigma certification process just one year earlier.

Getting back to my prospective hire, I saw no gaps in her history. I knew from talking to others that she had started a business which was failing. From my read of the situation, the business was a bit ahead of its time and would be difficult to scale, even in the best circumstances. Nevertheless, the fact that she had picked herself back up and was out trying again is a huge positive, provided the person learns a few things.

We scheduled a meeting at my very utilitarian, low rent office. Real estate people would call it a “Class C.” My office is basically in a loft above a hangar which houses two planes and a helicopter, partially visible through a couple of windows on one side. The entire office is adorned with airplane memorabilia, photos, prints, propellers, you name it. If it’s aviation related, it can be found in my office.

I heard her come in the front door and she was greeted by some teammates on the first floor. She walked up the open staircase and turned and looked at me. The second our eyes met, something in my gut yelled “Red Flag!” I’m not sure why; something just wasn’t right. She was well dressed, attractive, and seemed very poised; yet there was just something about her that had triggered that sixth sense.

After practicing medicine for more than twenty-seven years, I’ve gotten fairly good at trusting my gut, at least as far as patients go. There are times when I’ve treated patients and can’t figure out precisely what’s wrong. I just know something is seriously wrong with them and that someone needs to figure it out. More often than not, I’m right. This trait isn’t special to me; all my emergency medicine colleagues have some degree of “gut instinct,” which probably grows with the number of grey hairs.

The prospective executive sat down and began to talk. One thing about my interview style is that I like to ask questions designed to learn about the person, not simply the role. I leave it to my teammates to ask the detailed knowledge-based questions. I ask what I consider are the simple but hard questions, designed to see if the applicant will fit in our environment, work well with our team, persevere during adversity, be kind, compassionate, and trustworthy.

She told me her business was on the block to be sold and that she was entertaining multiple offers to purchase it. I thought this was rather odd, because just a moment earlier she told me she was “winding down her business.” I asked her a few questions about the incongruity between “winding down” and “entertaining multiple offers.” She danced around the answers for a bit before blurting out, “Did you used to fly?” Now, I know I’m nearly as old as Moses, but I’m still kicking and as long as I can pass my flight physical and am still breathing, I will be flying. I responded, “Actually, I still fly.”

She then went on to tell me she’d done some consulting work out at Luke Air Force Base on one of their health care initiatives. As a reward, she said they “gave me a ride in an M-35.” Somewhat incredulous, I asked: “Do you mean an F-35?” She said, “Yeah, you know, the new one. It made me kind of sick to my stomach but it was really fun!”

Directly in her line of sight is a framed 24” x 36” picture of me and an F-16 Squadron Commander, call sign “Wyatt,” on the wall, standing in front of his plane. We’re both dressed in flight suits and still stuffed into our “G” suits. One of us looks a bit worse for the wear but is wearing an ear-to-ear smile—me. From 2010 to 2012, I was an honorary commander at Luke and had the great fortune to fly with Wyatt in his F-16.

At this point in our interview, she was “Tango Uniform,” a military slang term roughly meaning “broken beyond repair; dead.” First, there are no two-seat F-35s. Second, no F-35 had yet landed at Luke. Third, to quote the Base Commander, “No civilian, except celebrities and honorary commanders, gets rides in an F-16 and no one gets a ride in an F-35.”

I didn’t call her on it. There was no point. I wasn’t going to hire her, no matter what else she said. Anyone who lies to my face about an area where I have at least some rudimentary knowledge is pathological.

I knew none of this before she first arrived in my office. Yet, for some reason, my internal alarm system had been triggered the moment I first saw her.

Previous: 10 Tips for Aspiring Writers for Encourage a Young Writer Day
Next: National Education and Sharing Day- Learn About 2 Women Who Risked Their Lives for Education