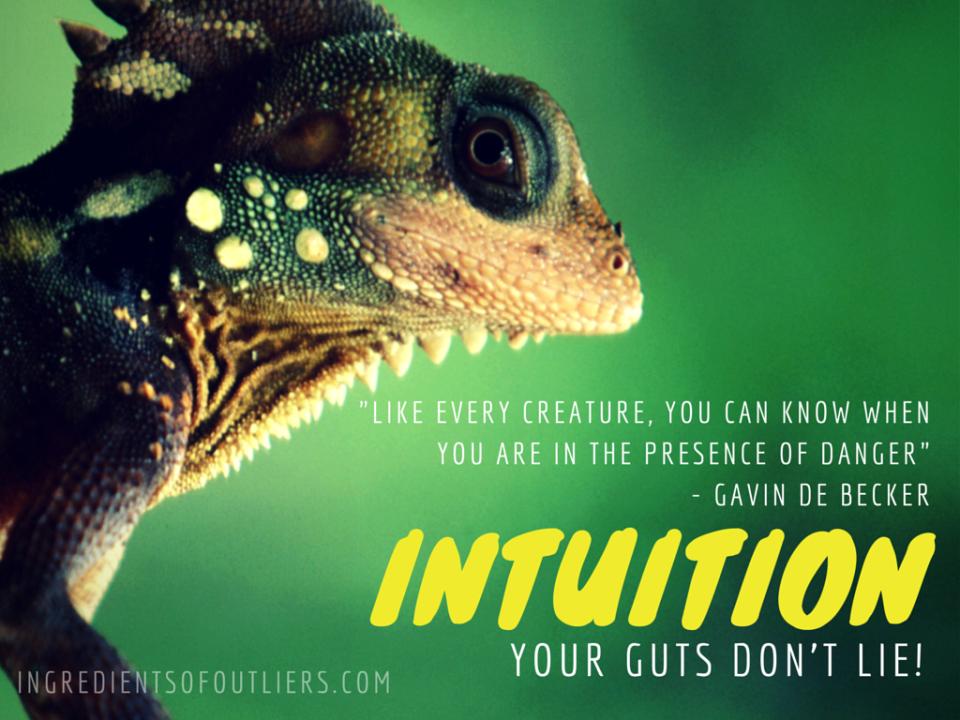 From Chapter 15 “Intuition” in Ingredients of Outliers.

In his book, The Gift of Fear: Survival Signals that Protect Us from Violence, Gavin de Becker—an FBI profiler, security consultant, and presidential appointee—describes, in a thorough and compelling manner, the importance of intuition as an early warning system when our safety and well-being are threatened. At first glance, the words “gift” and “fear” may seem like an odd coupling, but de Becker quickly makes his case.

In his opening chapter, he writes: “I am called an expert. I may have learned many lessons, but my basic premise in these pages is that you too are an expert at predicting violent behavior. Like every creature, you can know when you are in the presence of danger. You have the gift of a brilliant guardian that stands ready to warn you of hazards and guide you through risky situations.” That brilliant guardian, that early warning system, is indeed fear.

In an article in a recent issue of Reader’s Digest (February 2013), author Kathryn Wallace affirms de Becker’s findings. “Fear,” she writes, “should be our best friend. It’s a chemical reaction, a signal to pay attention to a threat. It’s our brain alerting us to danger, triggering the classic fight-or-flight response . . . to help us survive.”

Ignoring these early warnings, or red flags, can have serious consequences. When questioned about his findings during a televised interview, de Becker said: “I ask people who have been assaulted if they had any warning beforehand. Many say they couldn’t put their finger on it, but they knew something was wrong. When asked, ‘Why didn’t you call for help?’ they say they couldn’t see any evidence to justify their alarm so they dismissed it. They listened to their intellect, not their instincts.” In other words, they blew past those red flags.

For example, the proliferation of websites where you’re promised a match with the man or woman of your dreams has made the “dating game” about as safe to play as Russian Roulette. It’s gotten so bad that it gave birth to an organization named Heartless Bitches International, which has published a detailed list of warnings that women (and, in some cases, men) should heed in developing relationships.

The last time I checked, its website listed 170 red flags (sample: #87 – He seems like “a challenge,” or “a diamond in the rough.”). That reminded me of this bit of advice from Mae West, a famous early twentieth century quick-witted actress and sex symbol. “Don’t marry a man to reform him,” she said. “That’s what reform schools are for.”

The new version of that quote can be found on a September 24, 2011 Saturday Night Live skit with Kristen Wig, who’s wearing the new Chanel “Red Flag” perfume to warn men that she’s “F%$#ing Crazy!” The popularity and ubiquity of the Internet have made it easy for anyone to post red flag warnings on nearly any conceivable topic. Google the words “red flags,” and you’ll find more than fifty million sites. While the red flags in the relationships category are numerous, you’ll find some in whatever activity you choose. Whether you’re buying a car, banking online, making investments, paying bills, using Facebook, Pinterest, or any other social media, listing items on eBay or Craig’s list, and on and on and on, you’ll find red flags galore.

Call it what you will—intuition, instinct, a gut feeling, a hunch, a sixth sense, a red flag—fear—as de Becker (quoted above) reminds us, “it will not waste your time.” The message it sends can be either negative or positive and, in either case, we’d do well to pay attention as, according to de Becker, “it always has your best interest at heart.”

Previous: Go For Broke Day: Your ticket to changing jobs, moving, and venturing out of your comfort zone
Next: 12 Steps to Getting More Active for National Walking Day