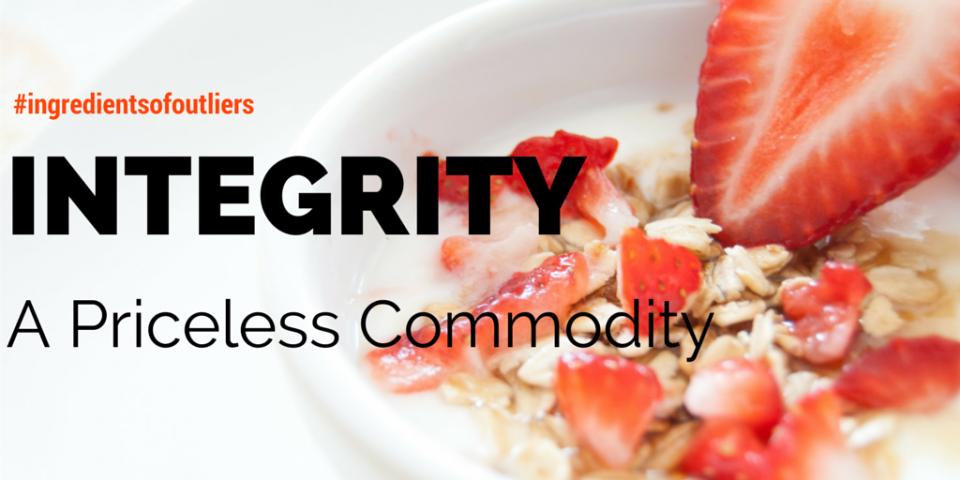 From Chapter 14 “Integrity” in Ingredients of Outliers.

Simply put, integrity is doing what you say and saying what you’ll do. The term is derived from the Latin word integer, which means “whole or complete.” When a person has integrity, he or she is believed to have an inner sense of “wholeness,” derived from consistency of action and character. The characteristics or qualities that comprise integrity are often defined as truthfulness, honesty, consistency, morality, accountability, responsibility, and loyalty.

Today’s media is filled with stories that lead to the almost inevitable conclusion that integrity is sorely lacking in our nation and around the world. From swindlers to pedophiles, identity thieves to drug-using athletes, from prevaricating politicians to philandering spouses, virtually every facet of society has been infected by predators preying on innocent victims.

While integrity today seems to be lacking to a greater degree than ever before, we should keep in mind that it’s been going on throughout recorded history. Before we throw in the towel, however, let’s look at some examples which indicate that integrity is still alive and well in many circles.

On second thought, when we consider how much attention is paid when someone demonstrates integrity, “alive and well” may be an overstatement. Were that really the case, the two stories I’m about to tell likely wouldn’t have attracted much attention.

Unless you’re an avid tennis fan and have been for a long time, the name Eliot Teltscher may not be familiar to you. The son of immigrants from Israel, he was born in Southern California in 1959. Encouraged by his parents, he began playing tennis at age nine.

It proved to be a good choice. By the time Eliot was 17, he was among the top ten junior players in the nation. That performance earned him a tennis scholarship at the University of California at Los Angeles (UCLA). In his only year at UCLA (1978), he was named an All-American.

Teltscher left UCLA to become a professional tennis player and, within a year, he was ranked among the top ten players in the world. Known as a fiery competitor, he retired as a player in 1988 to become a tennis coach.

When asked which of his many accomplishments he’s most proud of as a tennis player, it’s not his many victories or awards he first mentions. In fact, it was in a moment of defeat that his competitive nature was overruled by his integrity. In 1982, playing another top-ten ranked player, Vitas Gerulaitis, in the final round of a major tournament, the latter was at match point. Gerulaitis then hit a shot that barely cleared the net, seemingly out of Teltscher’s reach, but at the last second he was able to reach the ball and lob it over his opponent’s head, staving off defeat, at least momentarily.

However, Teltscher knew something that neither his opponent nor the umpire realized. In his lunge to retrieve the ball, his racket had barely scraped the net, in violation of the rules. It had no effect on his shot, nor would anyone have been the wiser. But Eliot Teltscher was and he immediately reported the infraction, costing him not just that point but the match as well.

Some 2,500 years ago, the Greek philosopher Heraclitus wrote: “Good character is not formed in a week or a month. It is created little by little, day by day.” Teltscher’s immediate reaction and response wasn’t something he had to think about. It was his integrity that shaped his life and revealed itself in an instant.

Previous: TEDxASU Organizers Annouce Author Dr. John Shufeldt as a Speaker for the Inaugural April 23rd Event
Next: What Will Happen When Your Integrity is Tested?