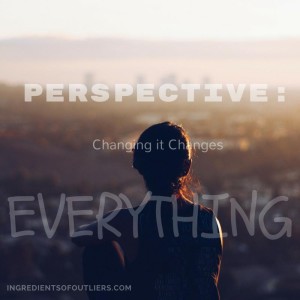 From Chapter 11 “Perspective” in Ingredients of Outliers.

Life is simply about perspective. If ranked, this is the most important of all the lessons I’ve learned. Simply changing your perspective changes everything. For example, I recently had a patient who was in moderate respiratory distress from the pulmonary embolism we diagnosed in the emergency department. He was also dying of colon cancer. When I told him about this latest diagnosis, he said, “Whew, at least I’m still on the right side of the turf.”

For most of us—me included—the thought of a pulmonary embolism would be horrifying. This man was afraid his colon cancer had metastasized to his lungs, so he was actually relieved when he heard the diagnosis.

In the grand scheme of things, we’re only among the living for a short time. Why do things that don’t bring you joy, or aren’t fun? I’m continually amazed by people who hate their jobs, their lives, their significant others, their bodies, etc., but don’t make any effort to change their circumstances. If they’re unwilling to take the necessary steps, they should at least think about altering their perspectives, so that whatever’s making them so miserable is seen with a fresh set of eyes.

From my perspective, I like to say I’ve never worked a day in my life. If you figure out a way to enjoy everything you do, then nothing feels like work. Winston Churchill said it this way: “Human beings are of two classes: those whose work is work and whose pleasure is pleasure, and those whose work and pleasure are one.”

In the Control Room

Let’s chat about a man who, over a 48-year career, experienced that happy combination of pleasure and work—for the most part anyway. His name was Charlie Jones (no relation to Charlie “Tremendous” Jones mentioned in chapters 6 and 9). As a well-known sportscaster, he spent nearly a half-century doing what he loved.

Born and raised in Fort Smith, Arkansas, Charlie began what would be an award-winning career in the broadcast booth, covering various sports for radio and TV stations in his hometown. In 1960, he joined the ABC network, broadcasting American Football League (AFL) games. In 1965, he moved to NBC, covering National Football League (NFL) games and numerous other sports until 1997.

Charlie’s expertise was by no means limited to football. During his NBC career, he also broadcast the 1998, 1992, and 1996 Olympics; the 1986 FIFA World Cup (soccer); the 1991 Ryder Cup (golf); Major League baseball games; Wimbledon tennis matches, and other high profile sports activities.

In introducing Charlie, I used the term “for the most part anyway” in describing his love for his work. One exception took place in 1996, when he first learned of his Olympic assignment. Instead of the high profile events (swimming, track, etc.) he’d broadcast during the 1988 and 1992 Games (held in South Korea and Spain, respectively), his assignment in Atlanta was to cover the much less popular events of rowing, canoeing, and kayaking. Not only would they command smaller audiences, but they were to be staged at venues located miles away from the major events in Atlanta.

From Charlie’s perspective, the assignment was a big disappointment. But he was a professional and wasn’t going to allow his feelings to affect his work. Before the events got underway, he began interviewing the athletes who would be competing in them, asking them about how they might handle such conditions as rain, high winds, strong currents, and equipment malfunction. To his surprise, the answer to his questions, no matter which competitor he asked, was the same: “That’s outside my boat.” In other words, there was no point in worrying about things outside of their control.

Charlie took that lesson to heart, determined to put his feelings of disappointment aside and to give his very best to every event he broadcast. Later, he would rank his assignment at those Olympic Games among his all-time favorites.

But the lessons he’d learned from those athletes would have even greater impact in days to come. To capture those lessons, he teamed up with co-author Kim Doren to write a book, titled That’s Outside My Boat: Letting Go of What You Can’t Control. In their research they interviewed people from all walks of life about how they handle events outside of their control. The results, in the words of one reviewer, “reinforce the idea that focusing on what you can influence is what’s inside your boat, allows you to relax, making for a less stressful, more positive, and ultimately more productive workplace and life.”

Each of us has a control room in our minds. What takes place there is the same thing that changed Charlie Jones’s attitude from disappointment to “by far the best Olympics of my life.” In can be summed up in a single word—perspective.

Previous: The 50th Year Anniversary of Human Rights Day
Next: Setting Up Your Classroom for Success: Proactive Classroom Management