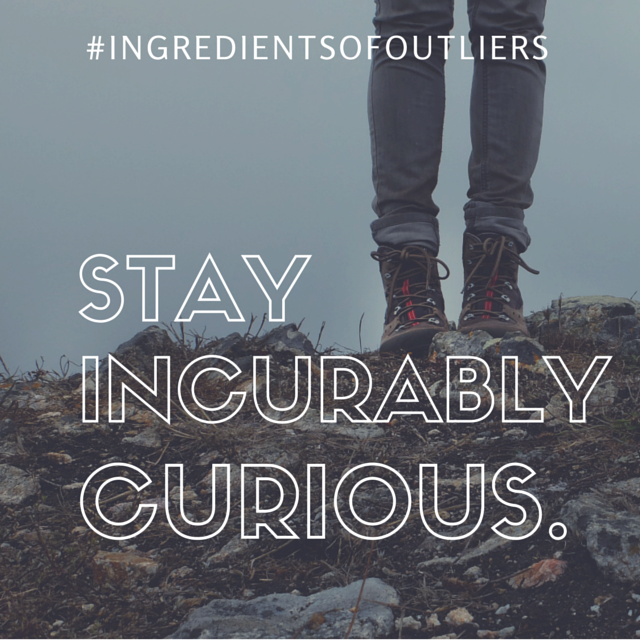 From Chapter 9 “Learning” in Ingredients of Outliers.

Fair enough! But what’s the secret, the primary ingredient, to being a lifelong learner? The answer, of course, is curiosity! The 18th century English author Samuel Johnson called curiosity “the thirst of the soul.” Two centuries later American author William Arthur Ward described it as “the wick in the candle of learning.” And the late, great Walt Disney claimed that it “keeps leading us down new paths.”

If asked to nominate one person who, perhaps more than any other, might epitomize the word “curiosity,” it would be hard to overlook the late Richard P. Feynman. He was a Nobel Prize-winning American physicist, scholar, and author, who served for many years as a professor at the prestigious California Institute of Technology, or, as it’s popularly known, Caltech.

In many ways, Feynman belied the scholarly image of a professor and scientist and was better known in many circles as a prankster and practical joker. For example, while based at Los Alamos National Laboratory, where the atom bomb was being developed, he amused himself by picking the locks of cabinets containing top secret documents and leaving behind cryptic notes suggesting the presence of enemy agents.

At other times he taught himself how to juggle, play bongo drums, paint, and learn other skills with seemingly little if any connection to his scientific endeavors. Asked to explain what “made him tick,” he told one interviewer: “I’ve been caught, so to speak—like someone who was given something wonderful when he was a child and he’s always looking for it again. I’m always looking, like a child, for the wonders I know I’m going to find—maybe not every time, but every once in a while.”

It was his lifelong curiosity that enabled Feynman to reach the pinnacle of his profession and earn the respect of his peers.

The Questions You Ask

There are a couple of good ways to keep that wick of curiosity burning. One is by asking questions and another is by reading. Not long ago I heard a great story about a young boy named Martin Perl, who was born in New York City in 1927 to Jewish parents who had emigrated from Russia to the United States around the start of the twentieth century.

In his autobiography, Perl described the importance his parents placed on his education. “Going to school,” he wrote, “and working for good marks, indeed working for very good marks, was a serious business. My parents regarded school teachers as higher beings, as did many immigrants. School principals were gods to be worshiped but never seen by children or parents. Parents never visited the school to talk about the curriculum or to meet with their child’s teacher.”

Yet it was his mother who instilled in him perhaps the most important lesson of all. “Every day when I came home from school,” he explained, “she asked me, ‘So, Marty, did you ask any good questions today?’” It was that habit of asking questions that helped Martin Perl become a distinguished physicist who, in 1995, was awarded the Nobel Prize in Physics for his discovery of the tau lepton—an elementary particle similar to the electron.