From Chapter 7, “Tolerating Risk- Being a Doer, Not a Dreamer” in Ingredients of Outliers 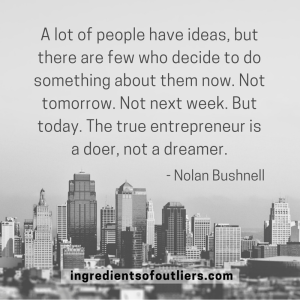 Years ago, in the Funky Winkerbean comic strip, Tony, the owner of the local pizza joint, is giving some business advice to the teenaged Funky and his friends. I don’t remember the exact words, but Tony explains to them that the way to make a small fortune in business is—to start out with a large fortune. By the way, the same holds true in aviation. The standing joke is that if you want to make a lot of money in aviation, start with a lot of money. Just ask Frank Lorenzo, former CEO of bankrupt Eastern Airlines.

Sure it’s an old gag and it was meant for laughs, but business history is filled with stories of would-be entrepreneurs who learned the hard way that there was nothing funny about it. In some circles, reports of failure after failure have given entrepreneurism a bad name.

Throughout history, entrepreneurs have faced harsh critics. From Shakespeare’s The Merchant of Venice through Oliver Stone’s movie Wall Street (“Greed is good, greed works,” etc.) entrepreneurial efforts are cast in a dim light. Often the budding entrepreneur has only himself or herself to blame, having fallen so much in love with that “Big Idea,” that reality has flown out the window. (I can relate; stay tuned.)

To paraphrase, Lifebook founder Jon Butcher said, “No other social system can compete with the free-market, entrepreneurial system in terms of productivity, raising living standards, and creating prosperity… Yet, despite its overwhelming contributions, some elements of society still associate profit-making with vice.”

When it comes to entrepreneurial ventures,I’m all in favor of developing a positive attitude, as long as there’s some common sense mixed in with it. Norman Vincent Peale’s advice that, “It’s always too early to quit,” works fine as a life motto, but doesn’t necessarily apply to every situation we face. The same is true for the famous statement from nineteenth century British writer William E. Hickson: “If at first you don’t succeed, try, try again.”

Again, that’s okay up to a point. But to cite another old truism, there can come a time to “stop beating a dead horse.” W.C. Fields, the legendary actor, comedian, writer, and curmudgeon of the early twentieth century put it this way: “If at first you don’t succeed, try, try again. Then quit. There’s no use being a damn fool about it.”

As you’ll see shortly, I’ve found myself astride dead horses on occasion but, fortunately, I’d been made aware of the tribal wisdom of the Dakota Indians. Passed down from generation to generation, it states simply: “When you discover you’re riding a dead horse, the best strategy is to dismount.” Accordingly, when I’ve faced such conditions, I’ve usually been able to get out of the saddle before too much damage, financial or otherwise, has been done—keyword, usually.

Failure to follow that advice can, and likely will, have serious consequences. Desperate business owners and managers, refusing to recognize the horse’s demise, have been known to try various “solutions,” including these, which have been floating around on the Internet for quite some time:

A Horse of My Own

Among the horses that died on me while I was galloping merrily along was one I’d named Vibrapon. It was a product I’d designed for women and it employed low-level vibrations to increase blood flow to muscle tissue, thereby relieving menstrual cramps caused by uterine contractions and lower blood flow to the uterus. I figured if a tampon could incorporate this small, non-disposable, removable component, it would be a huge hit! I even had the first commercial written. “I used to hate that time of the month until I discovered the Vibrapon. Now I almost look forward to getting my period.”

Unfortunately, I learned that someone had already (uhh) conceived and patented the Vibrapon, though the fact that no one has ever heard of it probably doesn’t speak well for its success. Lesson: You have to be a risk taker to start a business and have the vision to see it through.

This also bears out an important tip: check the U.S. Patent and Trademark Office website (www.uspto.gov) before spending any capital on what you believe to be an innovative idea. Ob-Gyn friends have told my why, physiologically speaking, the Vibrapon was doomed for failure—it has to do with prostaglandins and other pain causing chemicals. Despite this, I had no shortage of woman volunteers wanting to try the beta version.

Previous: Teachers Who Write: Clarke Sturges, a True Outlier
Next: Powerful Body Language of Leaders- How are you portraying yourself?