From Chapter 5, “Communication- A Lost Art” in Ingredients of Outliers 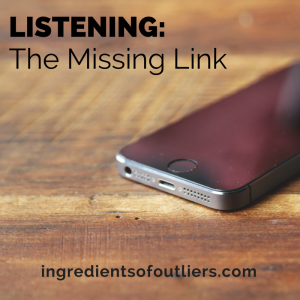 The late Mortimer Adler, a popular American author and educator, described that process well. “Communication,” he said, “is like playing catch. Catching is as much of a skill as throwing, though it is a skill of a different kind.” Unfortunately, instead of catching what’s been thrown, we seem to keep dropping the ball, and we’ve been doing so for a long time.

Long before David Letterman or Jay Leno appeared on the scene, Steve Allen was the king of late-night television. As a regular feature on The Tonight Show, Allen would leave the stage and walk down among the audience. Stopping at one row, he’d whisper a brief statement to the person in the aisle seat, who was to quietly repeat it to the person in the adjacent seat, and so on until it reached the far end of that aisle.

Allen would then have that last person repeat the statement aloud while at the same time the original statement would appear on the screen. Invariably, there was little or no resemblance between the two, resulting in gales of laughter from the audience. Nevertheless, it clearly demonstrated that we’re a nation of non-listeners—and that was more than a half-century ago.

Ever since, that sorry fact has been noted again and again. In 1982, newspaper columnist Jim Sanderson called listening: “one of the great lost arts in human relationships. People instinctively react to any opening you give them to talk about themselves.” A few years later (1988), well-known author and speaker Leo F. Buscaglia commented: “It seems that few people listen anymore. . . I’m beginning to wonder if they [listeners] are a vanishing breed.”

Previous: Communication: A Lost Art
Next: 40 Leadership Quotes to Sticky Note your Life with