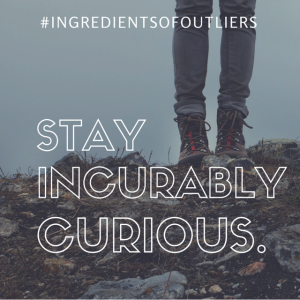 From Chapter 9 “Learning” in Ingredients of Outliers. A Key Ingredient Fair enough! But what’s the secret, the primary ingredient, to being a lifelong learner? The answer, of course, is curiosity! The 18th century English author Samuel Johnson called curiosity “the thirst of the soul.” Two centuries later American author William Arthur Ward described it as “the wick in the candle of learning.” And the late, great Walt Disney claimed that it “keeps leading us down new paths.” If asked to nominate one person who, perhaps more than any other, might epitomize the word “curiosity,” it … END_OF_DOCUMENT_TOKEN_TO_BE_REPLACED