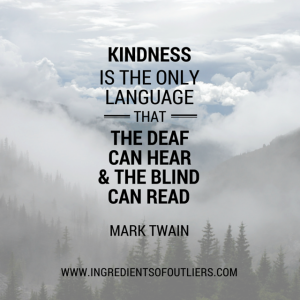 From Chapter 8, "Kindness: The Art of Paying it Forward" in Ingredients of Outliers From Slavery to Significance Another boy whose life would be forever changed by an act of kindness was Frederick Bailey, born to a slave woman in 1818. He never knew his father and he was only seven when his mother left him with the owner of the plantation and his life of slavery began. He was beaten often and forced to go long hours with neither food nor sleep. Recalling those days, he would later write, “I was broken in body, soul and spirit.” Back then it was against the law to teach slaves to read … END_OF_DOCUMENT_TOKEN_TO_BE_REPLACED