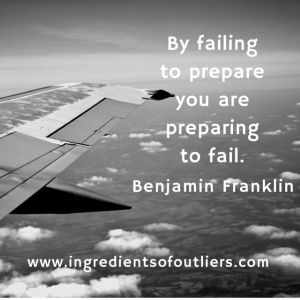 If you’re sitting on a commercial airliner that’s preparing for takeoff and happen to overhear the captain asking that question, it probably wouldn’t do a whole lot for your peace of mind. An unlikely situation? Sure it is, but I heard of one case where it could have happened.

Years ago, a senior captain of one of the major airlines was preparing to fly a Boeing 747 from Los Angeles to Seoul, Korea. It would be the first time he’d ever even set foot on a 747, much less flown one, and had a full load of passengers counting on him.

As he was making his way through a hangar to board the flight, he spotted another 747 on which a crew was doing some maintenance, so he decided to climb aboard and look around. Walking forward through the main cabin, he reached the front of the plane, but there was no flight deck or cockpit to be found. That’s when he learned from a nearby mechanic that the cockpit on the 747 is on the upper deck.

Imagine if that had been the plane scheduled for Korea. Walking up the aisle of that fully loaded plane and having to ask one of the flight crew—or worse, one of the passengers—how to get to the cockpit would likely have triggered a stampede toward the exits.

But was that pilot unprepared to fly that plane? Certainly not! He’d spent many hours in a flight simulator, which was an exact replica of the 747 cockpit. He’d already learned everything he needed to know about flying that plane and had dealt with extremely realistic simulations of just about every potential emergency. That training, combined with some 25,000 hours of flight time during his career, had him fully prepared to fly that aircraft (once he located the flight deck, of course).

Occasionally, before performing a spinal tap (inserting a long needle into the space where the spinal cord travels) I will remark, “I think this is how you do this—it’s my first one.” When I say that, I get some gauge on the person’s level of engagement and certainly on his or her sense of humor. Does making this comment mean I’m unprepared? No, it means I have a sick sense of humor.

Last year, I was involved in a near fatal airplane crash. I was the passenger in the cockpit of a plane which crashed on takeoff. A pilot friend was flying when a gust of wind hit us right at the moment of takeoff from a mountain airstrip. The plane veered off the runway to the left and then back to the right before striking a hangar.

Luckily, the person in the backseat near the exit (also a pilot) kicked the door open a moment before impact. Otherwise, we’d have been trapped. The pilot adroitly swung the tail of the plane around just prior to impact and therefore avoided going head first into the hangar door. We were all able to jump out as the plane caught fire and then exploded. No one said a word during the event; it was as if we’d rehearsed for this moment. The three of us have been flying together for a number of years, and oddly enough, we talked through a couple of “what if” scenarios over dinner the night before. One of the scenarios we talked about was being trapped in a burning plane and how important it was to jettison the doors prior to impact.

Here’s the bottom line: if you know what’s coming, if you’ve thought about all the various permutations of what could happen, nothing surprises you because you’ve already been there—you’ve prepared.