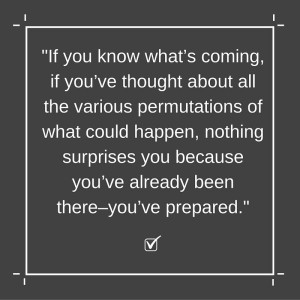 Being prepared is something that has saved my own tail in a few sticky situations. In fact, just last year, I was involved in a near fatal airplane crash. I was the passenger in the cockpit of a plane, which crashed on takeoff. A pilot friend was flying when a gust of wind hit us right at the moment of takeoff from a mountain airstrip. The plane veered off the runway to the left and then back to the right before striking a hangar.

Luckily, the person in the backseat near the exit (also a pilot) kicked the door open a moment before impact. Otherwise, we would have been trapped. The pilot adroitly swung the tail of the plane around just prior to impact and therefore avoided going head first into the hangar door. We were all able to jump out as the plane caught fire and then exploded. No one said a word during the event; it was as if we’d rehearsed for this moment. The three of us have been flying together for a number of years, and oddly enough, we talked through a couple of “what if” scenarios over dinner the night before. One of the scenarios we talked about was being trapped in a burning plane and how important it was to jettison the doors prior to impact.

Here’s the bottom line: if you know what’s coming, if you’ve thought about all the various permutations of what could happen, nothing surprises you because you’ve already been there–you’ve prepared.

Previous: Preparation vs. Paranoia
Next: Keep An Eye on Your Actions