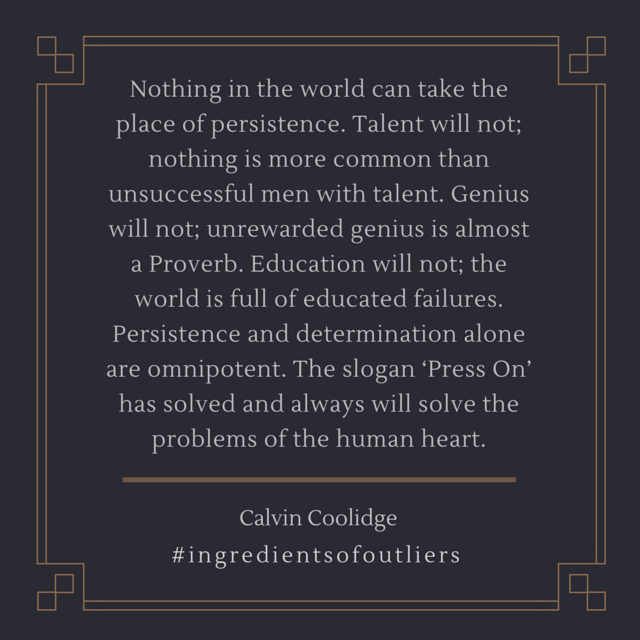 The above words, spoken nearly a century ago by the 30th President of the United States, have long been favorites of mine. They epitomize a core principle on which our nation was founded, and on which it has been shaped. Call it what you will— persistence, determination, tenacity, perseverance—it’s the quality of pressing on toward a goal, no matter what obstacles or difficulties may stand in the way.

This was brought home to me in a special way a few years ago when I attended the annual conference of the American College of Emergency Physicians, held that year in Boston. While there, along with learning (and relearning) some emergency medicine, I had the chance to walk along the Freedom Trail and enhance my understanding of our battle for independence.

What continually amazes me is how fortunate we were to actually succeed. Many times the only thing which turned the tide and saved the day was the perseverance of our founders. Many historians consider the Siege of Boston (starting after the battles of Lexington and Concord) to be the beginning of the Revolutionary War.

During the siege, militiamen surrounded Boston, attempting to prevent the British Army, which was garrisoned within Boston, from receiving supplies. To fortify his army’s position and prevent the British Navy from supplying the British Army, General George Washington sent a 25-year-old bookseller named Henry Knox to bring heavy cannons that had been captured at Fort Ticonderoga in New York all the way to Dorchester Heights, Massachusetts, which overlooked Boston’s harbor.

Over the wet and freezing winter of 1775-76, Knox and his small group moved 60 tons of artillery—by boat, horse-drawn sledges (which they built), and sheer perseverance—300 miles along snow-packed trails, across two semi-frozen rivers, and through forests and swamps, to the Boston area. It took them 56 days, averaging about five-and-a-half miles a day, to get those 120,000 pounds of artillery to their destination. It was a remarkable feat in the face of daunting obstacles.

Historian Victor Brooks called it “one of the most stupendous feats of logistics” of the entire war. Ultimately, the effectiveness of these cannons marked the turning point which eventually forced the British out of Boston.

Knox went on to serve with distinction in the Continental Army and rose through the ranks to become its youngest major general. Later, he served as the nation’s first Secretary of War and went on to champion the rights of Native Americans. Most importantly, his extraordinary accomplishments paved the way for our eventual independence.

Previous: Are Outliers Likable? What can be Learned from the Trending 13 Habits
Next: Learning to Lead Yourself