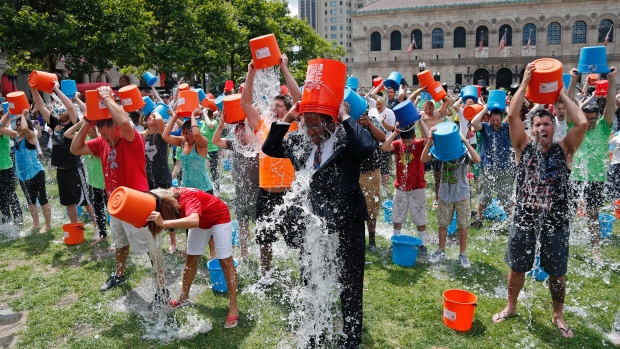 I’m sure you’ve heard the recent buzz about the “Cold Water Challenge” to raise funds for amyotrophic lateral sclerosis (ALS). If not, it’s been a grassroots movement, by everyone from Bob on the street to Justin Timberlake, where someone is filmed, nominating three individuals to donate $100 to the ALS Association, or dump a bucket of water + ice over their head, (there have also been variations where people donate $10 or more instead of $100 and take the bucket challenge). They post the video to their social media, tagging their nominees and include the hashtag #ALSIceBucketChallenge. When it works, it’s a chain reaction and those who have been challenged do the same.

The wild movement is raising a TON of awareness for ALS, but we wanted to know, is the dumping ice water on your head and donating less $$ really benefiting the ALS Association financially?  Read on for the current results of the #ALSIceWaterChallenge and be sure to go to the bottom for a hilarious video you don’t want to miss!

Amyotrophic lateral sclerosis (ALS), otherwise known as “Lou Gehrig’s Disease,” is a progressive neurodegenerative disease that affects nerve cells in the brain and the spinal cord. The degeneration of motor neurons interferes with voluntary muscle movement, which can result in patients to become completely paralyzed. Unfortunately due to the fact that there is not a cure or treatment today that halts or reverses ALS the disease leads to their death.

That is not to say that all hope is lost in finding a cure for this disease. With generous donations, researchers are hard at work to unveil a cure. Riluzole, an FDA approved drug, has been beneficial in slowing the progression of ALS in patients taking it. Several other clinical trials and drugs also hold promise. The goal of the ALS Cold Water Challenge is to raise more money for further research and finding a cure.

Is the movement actually working?

The numbers don’t lie. The movement has got major opinion leaders getting the word out about ALS and it is creating quite the Internet phenomenon. Check out this challenge video of Justin Timberlake.

In fact since the launch of the challenge the ALS foundation has raised $5.5 million in donations since July 29, compared with $32,000 in the same time period last year. $1 million dollars was raised last weekend alone. As the people keep dumping the donations keep rolling in. So skeptics should really chill themselves (literally).

But please note: when completing the challenge make sure to have someone strong enough to hold the bucket or this could happen:

How to join the cause and complete the #ALSColdWaterChallenge.

If you’ve decided you’re cool enough to participate. Grab a friend, a couple bags of ice + a bucket, and join in on supporting a phenomenal cause. But before that, please enjoy this video of The Outlier Series author, John Shufelt’s challenge.

Previous: Fake it Until you Make it: The Power of Enthusiasm
Next: Tips for Lifelong Learning! Staying young while becoming wiser in the process: