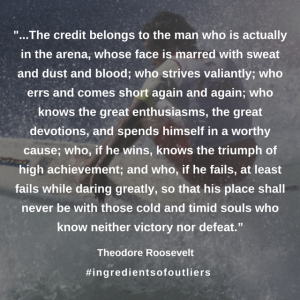 America’s history is replete with the stories of men and women whose “press on” and “never quit” attitudes are shining examples of the determination and the persevering spirit on which our nation was built. Among my favorites is Theodore Roosevelt, the President of the United States from 1901 to 1909.

Although he was one of the most colorful and popular men to have ever served in that capacity, Roosevelt was far more than a political figure. He was—among other things—an adventurer, an historian, a hunter, a naturalist, an orator, an explorer, and an author. His prodigious literary output includes 26 books, more than a thousand magazine articles, and thousands of speeches and letters.

Examples of Roosevelt’s perseverance abound. In 1912, as he was about to begin a speech, he was shot in the chest by a would-be assassin. Undeterred, he proceeded to deliver his speech after commenting to his audience: “Ladies and gentlemen, I don’t know if you fully understand but I have just been shot, but it takes more than that to kill a Bull Moose.” With blood seeping through his clothing, he spoke for 90 minutes before being taken to a hospital. The bullet would remain in his chest for the rest of his life.

In 1913, downcast following a rare political defeat, Roosevelt wanted to get away from Washington and accepted an invitation to speak in Argentina. While in South America, he joined forces with some Brazilian explorers to navigate a thousand-mile-long tributary of the Amazon River named the Rio da Duvida, the River of Doubt. It was a dangerous journey, one which nearly killed Roosevelt. Nevertheless, the team overcame one obstacle after another, successfully mapping the entire length of the Rio da Duvida. In recognition of that amazing feat and of the courage and tenacity of its leader, Brazilian officials changed the name of that river to Rio Roosevelt.

The story of that journey was told by author Candice Millard in her 2005 book, The River of Doubt. In the prologue this is how she described Roosevelt: “Each time he encountered an obstacle, he responded with more vigor, more energy, more raw determination. Each time he faced personal tragedy or weakness, he found his strength not in the sympathy of others, but in the harsh ordeal of unfamiliar new challenges and harsh adventure.”

Theodore Roosevelt might as well have been describing himself when he wrote these words: “It is not the critic who counts, not the one who points out how the strong man stumbled or how the doer of deeds might have done better. The credit belongs to the man who is actually in the arena, whose face is marred with sweat and dust and blood; who strives valiantly; who errs and comes short again and again; who knows the great enthusiasms, the great devotions, and spends himself in a worthy cause; who, if he wins, knows the triumph of high achievement; and who, if he fails, at least fails while daring greatly, so that his place shall never be with those cold and timid souls who know neither victory nor defeat.”